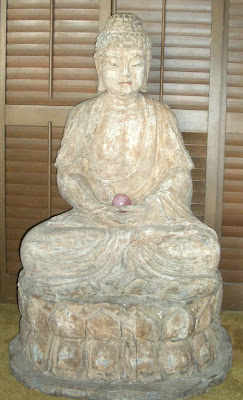 Only the development of compassion and understanding for others can bring us the tranquility and happiness we all seek.

His Holiness the Dalai Lama 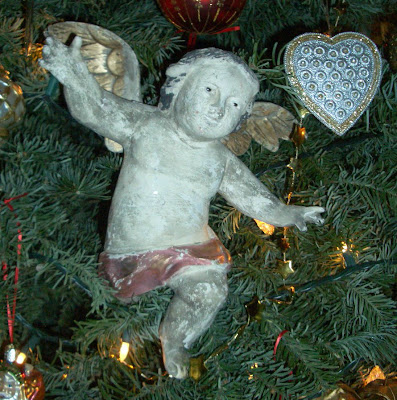 Merry Christmas!
Posted by Karina at 5:59 PM No comments:

Two weeks in France in October 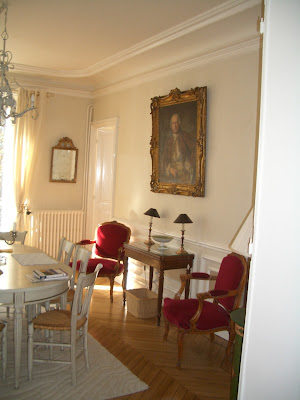 One sentence and one photograph was all I managed to blog while I was in France in October! A clear indication that my trip was spent doing other things. But who could blame me, after all,
Paris is Paris, France is France.

Not to turn this blog into a travelogue, I have to write about my fabulous apartment and some of the great restaurants, museums and art galleries that my friend Kathleen and I visited. The dining room of the apartment is pictured above.

We rented the apartment through www.parisperfect.com. What a wonderful surprise, it exceeded our expectations. The location at the foot of the Eiffel Tower was breathtaking and the apartment itself was beautifully decorated with antiques and it was well equipped with anything one could need. I cannot wait to go back. You can find pictures of the apartment on Paris Perfect website, the link above, ours was called Hermitage. The owner is a descendant of Marquis de la Fayette. La Fayette is a great hero of mine. We visited his grave at the Picpus Cemetery. The American flag has flown over it continuously since after World War I, even through the Nazi occupation. 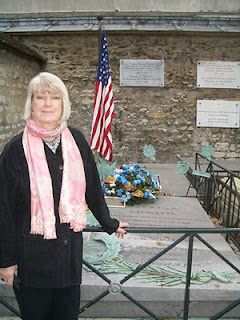 The apartment was very close to Musee du Quai Branly, which has a huge collection of tribal art from around the world. It was designed by Jean Nouvel, and caused quite a sensation three years ago when it opened. I have a collection of New Guinea and African masks and have enjoyed exploring the Musee Branly since the opening. 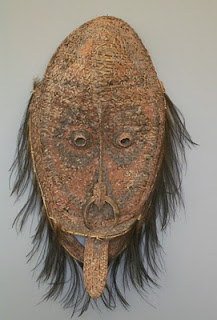 We had many great dinners in Paris, the best without a doubt at Le Cinq, the two Michelin star restaurant at Four Seasons Hotel George V. We had the wonderful Menu d'Automne with seasonal dishes, mushrooms, figs and foie gras created by chef Eric Briffand. Everything was perfection, not just the food, but the ambience, the service and the decor. I have to rave about the wine also. With the guidance of the sommelier we ordered a bottle of Ballot Millot Meursault Perrieres 2006. We both enjoyed it very much. 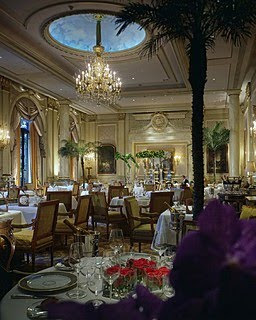 We saw Handel's opera Faramondo at the Theatre des Champs Elysees. The star counter tenor Max Emanuel Cencic who was to sing the title role, was replaced at the last minute by Mary Ellen Nesi. She rose to the occasion and sang beautifully.

After the performance we walked to the nearby Hotel Plaza Athenee for an after theater champagne and dessert. What a difference in attitude and service from Four Seasons George V!
My water was served from a dirty glass, I got the wrong coffee and was presented someone else's check! And all with an attitude.

We spent one day at the Marche aux Puces at Saint Ouen. I have to write a separate blog about it!

I have a standing date with a painting at the Louvre. Every time I visit Paris, I have to go see Antonello da Messina's Il Condottiere. I have been visiting him for over 30 years. What a powerful face, what determination. I am completely hypnotized by him. It is very easy to find him, just follow the signs for Mona Lisa and in the Grande Galerie just before you turn right to the gallery where Mona Lisa is, he is on the left hand wall. A few years ago I had a sort of catharsis while contemplating his handsome young face. I realized the passage of time and it's effects on me. While the man in the painting is forever young, I am slowly getting old. 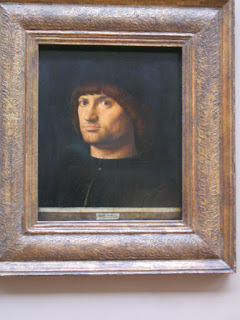 We also visited the Madeleine Vionnet exhibit at the Musee de la Mode. Her designs are truly timeless. She described her inspirations as Proportion, Balance, Movement and Truth. She was a master of simplicity and the bias cut.

After spending a week in Paris, we flew to Nice. We also rented an apartment there, on Promenade des Anglais. A great location and view of the Bay of the Angels.
One of the highlights in Nice was the Matisse Museum.

Our best meal was absolutely at Don Camilo Creations. Yes, it is a restaurant, they create wonderful meals. Our taxi driver was a bit confused, he thought it was a fashion house and asked if we really had an appointment at eight o'clock. We had the Menu Creation. The amuse bouche was a Veloute de Legumes, a velvety puree with a hint of pumpkin. It was followed by Foie Gras with cornbread and a fig compote, enhanced by volcanic black salt. The fish course was scallops accompanied by oyster ice cream . The main course was beef with potatoes dauphnoise and tarragon mousse. No French dinner is complete without a cheese course, we had Camembert soaked in "le Cid", a local wine, Chevre la Rochette and a Cantal. But as Kathleen put it, the OMG course was the dessert, which consisted of black chocolate mousse with roasted pears, chestnut mousse and chocolate ice cream. All the courses were paired with wines, the Foie Gras with a Jurancon; the scallops with a Bordeaux Chateau Gaillac; the beef wit a Cabernet La Tourboisie and the cheese with a Muscadet des Rivesarbres, Domaine des Gazes. A meal to remember!
As at Le Cinq in Paris, the chef had taken full advantage of seasonal ingredients.

We also visited Cannes, mostly for shopping and Antibes and Saint Paul de Vence.
We were totally charmed by the latter, a most charming hill town, although a bit touristy.

A great trip, hope you enjoyed it as well! 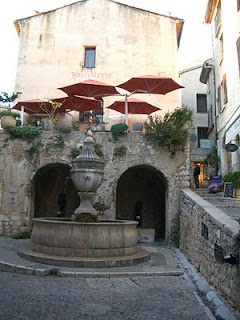 Posted by Karina at 5:56 PM No comments: