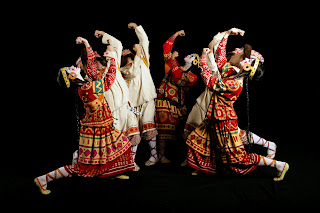 What an unforgettable evening Saturday at Los Angeles' Dorothy Chandler Pavilion. The highlight was the Joffrey Ballet's performance of Stravinsky's Rite of Spring. The ballet was first performed in Paris in May of 1913 causing a riot in the audience. I will not get into the avant-garde pagan like music and choreography which changed both art forms for ever.  Youtube has a wonderful video in three parts of the entire ballet by Fatova Mingus of Joffrey's 1987 recreation of the Nijinsky choreography which was believed to have been lost. Photo by Herbert Migdoll 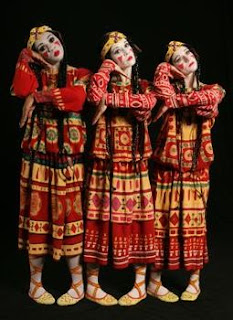 Just as dazzling as the music and the choreography were the costumes, designed by Nicholas Roerich for the 1913 production. Photo by Herbert Migdoll

The above original Nicholas Roerich costume is from the collection of the Victoria and Albert Museum in London. Just imagine the impact of all that color on the audience used to white tutus! 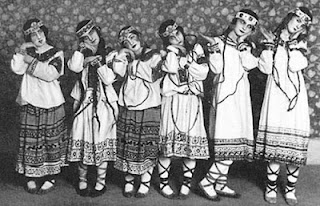 Above are members of the original 1913 the Ballets Russes cast back stage.﻿ Photo Private Collection/Roger-Viollet, Paris/The Bridgeman Library

"The Chosen One" performing her sacrificial dance to death so that the spring may return.﻿
﻿Photo by Herbert Migdoll
Posted by Karina at 3:52 PM No comments: